An exclusive tour for members--just one more reason to join LHS! 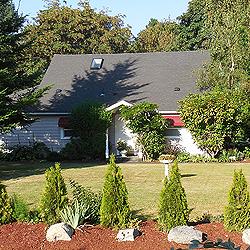 Seen from the road, you'd never guess how roomy it is… 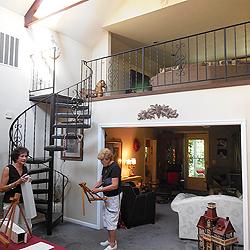 …until you're inside. Spiral staircase leads from living room to what was once the hayloft. 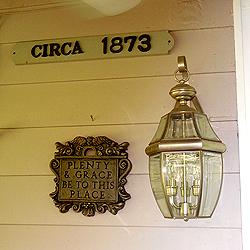 How many buildings in Pierce County can make this claim?

About thirty members of the Lakewood Historical Society and their guests gathered at a home on the banks of Flett Creek the evening of July 15, 2014 for a tour conducted by its owners, and to learn the history of a remarkable structure.

Built circa 1873 as a barn for cattle belonging to John Flett and his family (among the earliest settlers in the region), the building was extensively remodeled beginning in the 1980s. Today, it's a home with all the modern conveniences, but one which retains the charm of its humble origins.

Humble, that is, but also historic. The Fletts became so prominent among their fellow settlers that the vicinity for miles around their farm came to be known by that name. It was only natural, therefore, that a dairy founded in the 1890's by George Chapman should take the Flett name as well (a decision no doubt prompted as well by Chapman's marriage to Anna Flett, daughter of John).

In 1910, George sold his operation (including the barn that would someday be a house) to Robert Portman. Under his ownership, Flett grew into one of the largest, most successful dairies in the state. Flett milk, ice cream and other products were a familiar sight in western Washington supermarkets until well into the latter half of the 20th century.