City of Lakewood History: The Lakewood, Washington Story - Gateway to the Lakes

Lakewood was called The Prairie in the beginning - an expanse of land about 20 miles square, dotted with small lakes and occasional stands of Garry oak trees. Steilacoom and Nisqually Indians used the Prairie as a ready source of food and held gatherings before the advent of the white hunters, trappers and settlers.

This abundant Prairie, midway between the Columbia River and the city of Vancouver, BC, was chosen by the British in 1833 as the site of Fort Nisqually, one of the fur trading post operated by the Hudson's Bay Company (HBC). The bickering over the boundary between England and the United States was finally set at the 49th parallel in 1846. With the fur trade in decline and increasing harassment by American settlers, Fort Nisqually finally closed in 1869 and the United States paid the HBC $460,000 for its land.

Settlers began to set up farming on the Prairie. One of these farms, at the present site of Western State Hospital, was leased by the US Army in 1849 to serve as a military post following an Indian attack on Fort Nisqually. The new fort, called Fort Steilacoom, was used to quell Indian uprisings. Settlers from as far away as the Puyallup Valley used the Fort as a protection from danger. Indian uprisings continued over land they considered theirs, but was being rented by the U.S. government to the Hudson's Bay Company at $50 a month. The Nisqually Tribe's Chief Leschi became a tragic martyr when he was falsely accused of murder as a result of one such uprising. He was hanged on February 18, 1858 in a grove of oak trees near where the Oakbrook Shopping Center now stands. 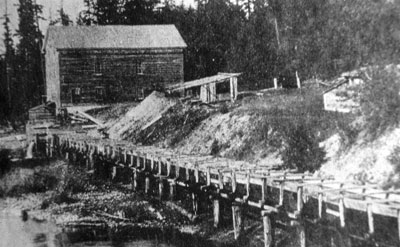 About that time the first grist mill (1850), saw mill (1852) and flour mill (1855) were set up by Andrew Byrd in the area now known as the Chambers Creek Estuary at the north end of Lake Steilacoom. Immigrants began to arrive in covered wagons over Naches Pass in 1853 after Washington became a Territory. 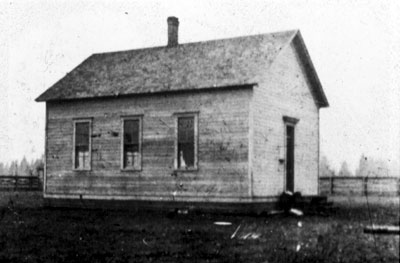 In 1855, Byrd School, the first schoolhouse built north of the Columbia River, originally built on the site of Park Lodge School was moved just west of the Flett Dairy property. One of the first houses built of frame rather than logs was the Boatman/Ainsworth residence which still stands as the oldest house in Lakewood on 112th Street across from Clover Park High School. 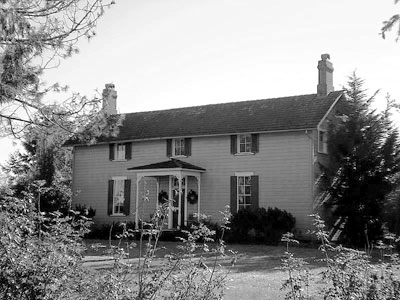 McClellan was selected in March 1853 to supervise the survey for the location of the western terminus of the much-anticipated Northern Pacific Railway. However, the intervention of the Civil War delayed actual construction of the road until the 1870's. Many small communities on Puget Sound vied for the distinction of being the western terminus. The selection of Tacoma was announced on July 14th, 1873 bringing about a thrilling drama centered on the prairie near Gravelly Lake.

As the railroad progressed within a few miles of Tacoma in September 1873, a financial panic caused the railroad's financiers to fail. With the railroad's solvency in question and payrolls in arrears, the construction crew made up largely of tough ex-miners from the Cariboo gold fields of British Columbia, refused to work; they set up barricades at Clover Creek, a station then called Skookumville. In a scenario that matched suspense movies of the Clark Gable-Spencer Tracy era, an engineer named Edward Slade "Skookum" Smith convinced the crews that the tracks must reach the western terminus during the time limitation set by the U.S. government. The future of the Puget Sound rested with them! The last spike was driven at 3 p.m. on December 16, 1873. The first train arrived at the pre-arranged point for celebration just 24 hours before the expiration of the charter.

During the late 1800's, the Prairie began to vanish. Homes and roads were built, with power lines at their side. The prolific Douglas Fir, no longer burned by the Indians, grew out of control. The land wrested by the British from the Indians, then the United States from the British, became the 42nd State of the Union in 1889. Indians and settlers were learning to live together, sometimes holding joint celebrations in the summertime on the natural picnic grounds of The Prairie. Contests of horseback riding often accompanied a good old-fashioned salmon bake.

Many stately homes were built on estates along the shorelines of area lakes, the most impressive being Thornewood, built on American Lake between 1909 and 1911. The Thorne Mansion, now renovated into a spectacular bed and breakfast, was once considered one of the most beautiful estates and gardens in the nation, and often attracted illustrious people of the early 1900s. Another spectacular home and garden of that era is the lovely Lakewold Gardens and Wagner Home on Gravelly Lake Drive. During the Roaring 20's, summer residents began to expand their lake cottages into year-round homes. 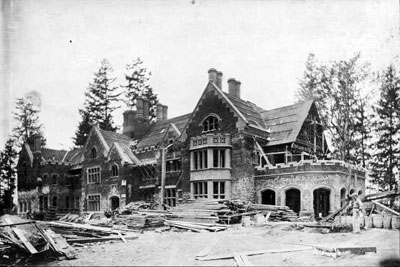 The Tacoma Country and Golf Club was established in 1894 to further attract the rich and famous. The first golf club west of the Mississippi, it featured trolley transportation from Tacoma to the playground on The Prairie. The Oakes Pavilion on Lake Steilacoom opened in 1923 offered boating, bathing and picnic grounds. In 1938, Norton Clapp converted it to the Lakewood Ice Arena. 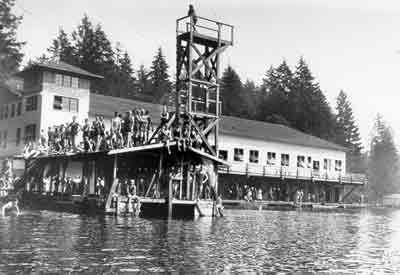 In the early 1900's, the famed Tacoma Speedway was built. The mile-long wooden track circled the open prairie and drew racing greats, such as Barney Oldfield, Louis Chevrolet and Eddie Rickenbacker. A grandstand was built along Steilacoom Boulevard, where Clover Park Technical College is today. 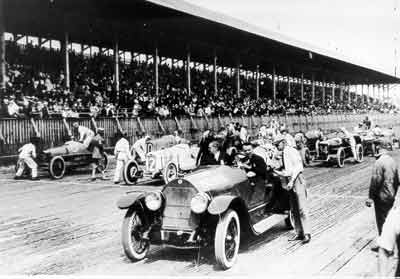 Airplanes found that the inner grasslands of the racetrack made a fine landing field in the post World War I years. Eventually, the airstrip was improved and hangars were built as part of the Mueller-Harkins Airport. The City of Tacoma used the airstrip as its commercial field for a time, and national air shows were held at the site until World War II.

Military presence returned when maneuvers began to be help on the Prairie starting in 1904. It was determined to be an excellent site that met all of the requirements of a new post and in 1917 Camp Lewis was built on land donated to the government by Pierce County citizens. McChord Field, now known as McChord Air Force Base, was developed from the old County Air Field in 1938. Both facilities continue to plan a prominent role in the area.

Lakewood was beginning to take on its own identity during the 1930's and 1940's. As the Great Depression lifted, business development took off. In 1937, Norton Clapp built the first part of the Lakewood Colonial Center, one of the first suburban shopping centers in the country. The rest of the building was completed in 1951 and the East Building across the street was built in 1955. 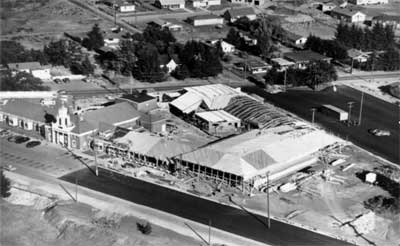 As the area grew, other amenities were added. Lakewood General Hospital opened on 100th Street in 1961 has been demolished and replaced by the St. Clare Hospital in 1990 on Bridgeport Way. The Flora B. Tenzler Memorial Library (now part of the pierce County Library System) was built in 1963. A community project, it is still supported by a private citizen's group. Clover Park Vocational Technical Institute grew as a war production training adjunct to Clover Park High School during World War II. In 1967, it joined the Community College System and has been renamed Clover Park Technical College. Fort Steilacoom Community College, established in a grocery storefront off Bridgeport Way in 1967 (known at the time as Albertson's U) moved into portable quarters at its present site on Farwest Drive in 1970. Its doors opened as Fort Steilacoom Community College in 1974, then changed to Pierce College in 1986.

In March, 1995, Lakewood citizens voted to incorporate as a city, passing with a 60% vote. In September, seven City Council Members were elected to form the city's first government. William Harrison was elected by the council as Lakewood's first mayor; and Claudia Thomas, the Deputy Mayor. Other original Council members were - Ann Kirk Davis, Colleen Henry, Jose Palmas, Douglas Richardson and Sherri Thomas. Lakewood officially became a city on February 28th, 1996, making it the seventh largest city in the state and the second largest in Pierce County. 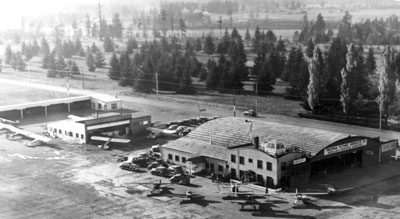 If you look closely, and listen, you will see the city's numerous lakes, enjoy the shaded streets, and feel the exuberance of activity as citizens continue to enhance Lakewood. And possibly, just possibility, on a warm summer evening, you might hear echoes of the joyous celebrations of Indians and early settlers camping out on The Prairie.

Provided by the Lakewood Chamber of Commerce & the Lakewood Historical Society. Written by Val Dumond and others.
MUSEUM