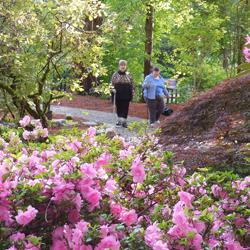 Though April showers came our way this year--and WOULDN'T LEAVE--they did bring these gorgeous rhodies, blooming in May. 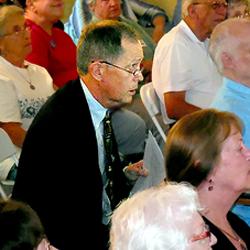 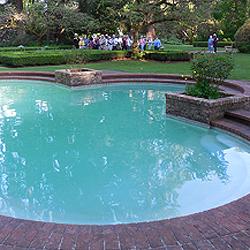 Carman, Griggs, and Wagner. Well known names around Lakewood, and especially well known to Lakewood Historical Society members. While not as well known, perhaps, as the “Three Tenors”, Joe Carman IV, Mark Griggs and Corydon Wagner III spoke about their relationship to the renowned Gravelly Lake Drive Estate. The Tuesday evening program featured family history and its connection to the history of Lakewold Gardens, during the May 20th Historical Society program, as part of celebrating National Historic Preservation Month.

Mr. Carman, as the descendant of H. F. Alexander, “that boy from Tacoma,” (as described by Chester Thorne and Sam Perkins in reference to the early day entrepreneur,) detailed the career of his “very tall” great-grandfather in his quest to own and operate the fastest, most powerful steamships on the Pacific Coast.

Acquiring the “U.S.S. Columbia”—a former troop ship—that was re-christened as the “Dorothy Alexander” was the crowning achievement. The other steamships were known as the Emma Alexander, and the Ruth Alexander. The truly luxury liner acquisition, at great expense and overcoming challenges—in order to transport a group of Shriners to Hawaii—was the most amusing part of the presentation. Sadly, the ship became a war casualty when the Japanese sank it during WW II.

Mr. Carman brought several family scrapbooks and other memorabilia that detailed Alexander’s life, and recapped anecdotes about life on Gravelly Lake “back in the day.”

Mr. Griggs and Mr. Wagner each added their personal recollections of the past century at this 10-acre garden estate, carved out of a chunk of land that was once part of the Puget Sound Agricultural Company’s (1833) Hudson’s Bay Company holdings.

Earlier that evening, Stephanie Walsh, Lakewold Gardens’ Executive Director, guided LHS members and guests on a garden tour of the newly dedicated Don and Mary Williams Asian-themed Garden, down the rhody-lined Circle Drive, and later talked about plans for the garden during this, Lakewold Garden's’ 25th anniversary year.

Yes, there was a pair of “signature” blue poppies in bloom near the knot garden. Guests were invited/encouraged to make return trips to the garden—particularly in a couple of weeks for the annual rhododendron deadheading party.

Lakewold truly is a gem of a Northwest garden, and Lakewood Historical Society is also a gem: the place to find information about local history.

Be sure to stop by to see the Lakewood History Museum's newest exhibit, "Home of the Free Because of the Brave: Lakewood's Military Neighbors", during regular hours Wed-Sat, 12 noon-4 pm. It is located in the historic Lakewood Colonial Center at 6211 Mt Tacoma Dr SW, across from Columbia Bank. Call 253-682-3480 or e-mail contact@lakewoodhistorical.org for information or to schedule a tour.