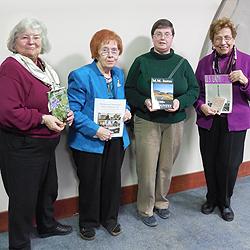 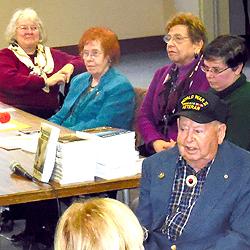 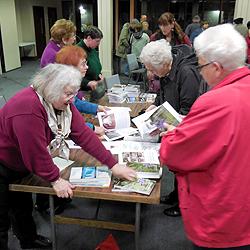 After the program, audience members flock to the table to get their signed first editions.

Disclaimer: Being part of a panel discussion about writing is a challenge—especially when you’re expected to talk AND write about it. Well, here goes.

So you want to be a writer?

About 50 Lakewood Historical Society members and others from the area filled St. Mary’s Parish Hall on March 18 to glean the 5 W’s about the Writing Art from authors Meg Justus, (Museum exhibit designer), Humorist Dorothy Wilhelm, Historian Carol Neufeld Stout, and yours truly; along with “Buddy” Emmons, whose more famous mother, Della Gould Emmons, was the author of several novels about historical persons such as Leschi and Sacagawea, plus the famous Washington Wagon Train emigrants who crossed the Naches Pass trail before settling in this region—the Sacagawea book was made into a movie (starring Charlton Heston!) in the 50s. He also spoke about his great uncle Jay Gould, who launched TV entertainer Lawrence Welk into fame.

As part of the Women’s History Month program, each of the authors told how they “got started” in this challenging profession, whether through necessity, curiosity, or just a desire to see their names in print.

Although none has yet written any “great American novel,”--Neufeld-Stout told how she used to read “with a flashlight under the blanket” when she was a young girl--it’s impressive to see the output—from history books such as “Steilacoom: 150 years of Educating Students,” to newsletter materials to humor books, such as Wilhelm’s “No Assembly Required.”

Perseverance is a key ingredient, the women agreed. Just get started.

You, too, could be a writer!