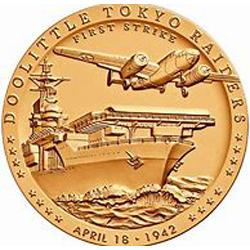 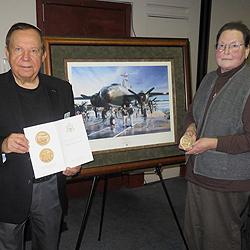 An enthusiastic group of 38 attendees gathered at St. Mary's Episcopal Church on November 27th to hear Board Member Phil Raschke give a 45 minute presentation on the famous World War II Doolittle Raid on Japan.  The April 18, 1942 raid was the first American attack on the Japanese home islands since their infamous attack on Pearl Harbor.  It was also the first time Army bombers were launched from a Navy aircraft carrier.

Raschke's presentation included "who's idea was it, where did the Raiders come from, what were their targets in Japan, their early discovery while still at sea, what happened to the Raiders following the raid and what impact did the raid have on the course of the war?"

Following the presentation, Raschke displayed an autographed painting of several Raiders and their B-25 aircraft aboard the aircraft carrier "Hornet" in route to their pre-determined launch site.  With the help of an audience member, Raschke also displayed the Congressional Gold Medal awarded to the Raiders on April 15, 2015.  The Congressional Gold Medal is only awarded to those "who have performed an achievement that has an impact on American history and that is likely to be recognized as a major achievement long after the event."

Of the 80 brave volunteers who took part in this daring, history making raid, only 62 survived the war.  As of this writing, only one member still remains with us, Lt. Richard E. Cole, age 103, Doolittle's co-pilot on Plane Number 1.