A NIGHT TO REMEMBER: OUR 20TH ANNIVERSARY GALA 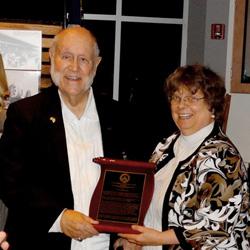 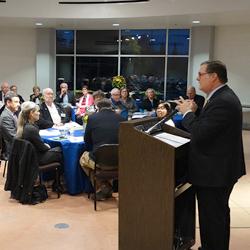 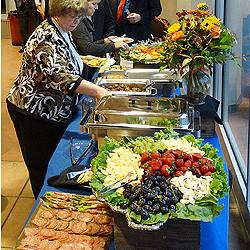 And, in addition to all that food for thought...

On Tuesday, October 23, the Lakewood Historical Society (LHS) celebrated 20 years of preserving, protecting and promoting our region’s heritage with a memorable gathering in the Rotunda on the campus of Clover Park Technical College (CPTC).

The guests who attended might have been a bit puzzled when their invitations first arrived—what did its depiction of an antique race car driven by some cigar-chomping old dude in goggles have to do with Lakewood or its history?

Plenty, as it turns out—one hundred years ago the site echoed with the roar of cars plying the second-most important track on the auto racing circuit (surpassed in attendance and prize money only by Indianapolis). It was a 2-mile oval, paved with wooden boards, and known as the Tacoma Speedway—and not until the US Open in 2015 did any sporting event in Pierce County attract more national attention than the races held there. As for the "cigar-chomping old dude in goggles", he's none other than Barney Oldfield, greatest racer of his day—and a competitor at the Speedway.

After the guests were seated, LHS Past President Becky Huber extended the Society’s welcome then invited them to help themselves to the delicious array of hors d’oeuvres and desserts provided by Just Call Susan catering.

After everyone helped themselves to the bounteous buffet that included salmon bites, roasted vegetables, BBQ chicken sliders and salted caramel brownies, the Gala kicked into high gear. Becky did so by introducing emcee Doug Richardson, who in turn introduced the Honorable Denny Heck, representative of Washington’s 10th Congressional District, the evening’s keynote speaker.

Addressing his topic, “Passing On Our Stories to Our Youth”, Congressman Heck began “In my six decades on this Earth, I’ve witnessed my share of history. I remember the feeling of those moments and the feeling is often what is most hard to convey. It is something historical societies and museums can help bring to life.”

Expressing appreciation to those working to find ways to channel and focus history’s power, he said: “The writing, to make it understandable for many different learning levels… determining and discovering the right content in the first place… that is probably the hardest battle, especially in this digital age.”

Heck concluded by sharing the insights he gained from his friendship with Billy Frank, Jr., a Nisqually Tribal leader and a civil rights leader. He was known for telling his story, and for telling others to tell their story. Because…that is how we come to understand one another, and the world around us.

“So I...introduced the Billy Frank Jr. “Tell Your Story” Act in Congress. It was signed into law about three years ago."

Next up to the podium was Steve Dunkelberger, long-time Lakewood journalist, news writer and on-line editor of the Tacoma Weekly, and co-author of two well-received books in the popular “Images of America” and “Local Legends” series, one on Lakewood, the other on its most prominent and/or notorious citizens.

As Steve tells it, one evening in 1998 he was sitting around a backyard picnic table with two history-minded friends—Richard Densley and the late Cy Happy—and happened to mention he had gathered a few photos and artifacts from Lakes District residents over the years through his work at the Lakewood Journal. Further discussion convinced them there was a need for a more formal way to collect bits and pieces of their new city’s history.

Dunkelberger, Densley and Happy took it upon themselves to create a historical society. After endless drafts of bylaws culminated in their first “official” organizational meeting, held at Fort Steilacoom. Talking through all of the requirements, the late Judge John Feutz, served as the Society’s legal counsel, filing the paperwork necessary to gain nonprofit status and licenses.

Endless hours of dedicated effort were devoted to the cause—collecting, cataloging, storing—but eight years passed before the founders could find a permanent home for the treasures they’d accumulated.

2006 saw the Lakewood History Museum open its doors for the first time, and in an appropriately historic location, the Lakewood Colonial Center.

The spirit of the founding fathers lives on, made evident at the Gala’s conclusion by Becky Huber’s presentation of the Lakewood Historical Society’s Cyrus Happy III Historian of the Year Award to Dr. Jerry Ramsey, PhD. Educator, public speaker, history re-enactor and radio host, and author “Stealing Puget Sound, 1832-1869", Dr. Ramsey was recognized for his continued efforts in keeping local history alive.

Everyone left with wonderful memories of the first 20 years of the Historical Society and visions of where the Society and Museum will go in the next 20 years.