It was a night to be remembered—for another 90 years! 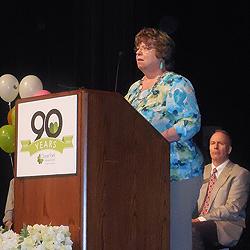 Becky shared the stage with a number of luminaries, including Congressman Denny Heck and here, Deputy Mayor Jason Whalen. 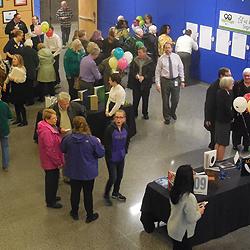 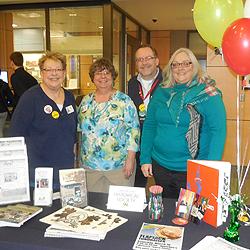 Past LHS President Becky Huber lets a crowded auditorium in on just what it took (spoiler: it took PLENTY!) for local educator Iva Alice Mann and a handful of her allies to unify a passel of tiny, squabbling school districts into one, big, successful—and long-lived—family. Reminiscences at the beginning of a most memorable occasion…

January 23rd 2018: Harrison Prep, Lakewood's newest public school, is the fitting locale for a celebration of both old and new—new hosting the 90th for the old 400.

Dignitaries from the political, educational and military spheres were present on the Harrison auditorium stage—among them our own Becky Huber, Past President of the Lakewood Historical Society, who filled the audience in on the history behind the celebration. Her remarks brought to life the heroic struggles and never-say-die spirit of a few public-spirited citizens and educators who, way back in 1928, had the foresight to realize the future of education in what was then a sparsely-populated patch of lakes and prairies would require somehow forging five fiercely independent grade school districts into a larger, more effective whole.

After years of hard, thankless work the five were finally brought together—the result, a conglomeration first known as the Union High School District #204. But educator Iva Alice Mann, the indomitable engine who, more than anyone else, had pushed the project (through many a dark day) to completion, already had a more poetic name in mind. It might be a few years before the time would be right to suggest it—but patience was one thing Iva had in abundance…

In 1941, when the last bricks had been laid for Lakewood's very first high school, Iva sprang her new name on officials of the district and the general public.  It was a name with a past—one the pioneers had first used to describe the Lakes District's lush, sprawling green fields—but also one that looked forward, acknowledging the new day that had dawned with the opening of a school that was not just new, it was the first of its kind in south Pierce County.

Iva's suggestion was, of course, adopted—and thus was born the Clover Park School District we know and celebrate today.

For more on the history of CPSD, see our Winter 2018 newsletter.

For additional coverage of the celebration, see the article in the Northwest Guardian.