Meet our new president --and our first-ever museum manager 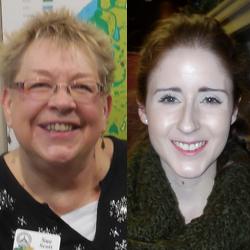 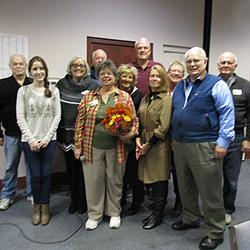 
The Lakewood Historical Society held its 2016 annual meeting at St. Mary's Episcopal Church in Lakewood on November 22.  Over 45 members and guests attended the meeting which elected new officers and directors for the coming year.

After ten outstanding years of hard work and dedicated service, President Becky Huber decided to step down from the position. Vice President Sue Scott was elected as the new President. Elected to the Vice President position was Ed Voie and Jim Curley was elected Treasurer.

Also attending the meeting was Emma Pierce, the newly hired Lakewood Museum Manager. Pierce is the first paid person to occupy this position and shows the Societies' commitment to manage and grow the museum's exhibits and collections.

Following the election of officers and an informative briefing on the "Honor Flight" program, refreshments were served and Board members gathered for a group photo (right).