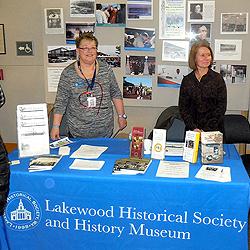 Vice President Sue Scott and Board Member Kristin Davis at the Society's table. 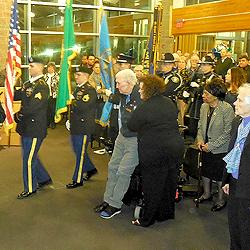 Society Director Emeritus (and first mayor of the City of Lakewood) Bill Harrison is among those standing for the entrance of the color guard. 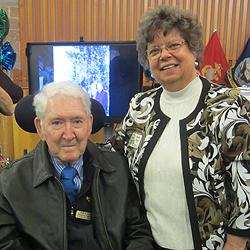 The Council Chambers were packed the evening of February 23rd as the City of Lakewood celebrated 20 years since its incorporation as Pierce County's second-largest city—and your Society was well-represented.

The fun began when the crowd, already balancing plates full of treats ranging from turkey wraps to sheet cake, was peppered with trivia questions testing its knowledge of Lakewood and its history.

This was followed by the entrance of the color guard, the singing of the national anthem by the Lakes High Studio choir and the reciting of the Pledge of Allegiance by our own Becky Huber, President of the Lakewood Historical Society.

Speakers, among them present and past mayors, hIghlighted accomplishments of the last 20 years and forecast changes to come in the next. Wrapping it up, Becky Huber paid tribute to the people who led the long, laborious process that finally resulted in incorporation. She also informed the crowd of the Historical Society's upcoming exhibit—which opened Sat. Feb 27 at the Museum—entitled "The Long Road to Cityhood."

NEW! Don't miss the City of Lakewood's official 20th Anniversary video at the bottom of this page!