Don't miss this special open house on May 30 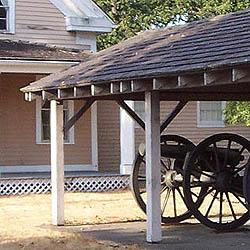 Why would anyone want to preserve buildings that date from the 1850s? Easy!

Because they provide a glimpse of how things looked about a century and a half ago. Saturday, May 30, at 2 pm, Lakewood Historical Society invites interested folks to join them as they tour the four restored circa 1850s buildings that are known as Historic Fort Steilacoom, located at 9601 Steilacoom Blvd SW, on the grounds of Western State Hospital.

These four remaining buildings were restored by a group of area volunteers in the latter years of the last century, and they provide a glimpse into military life in early Washington Territory. The fort operated between 1849-1868 and played an important role in early Washington history.

While the fort is usually only open from 1-4 p.m. on Sundays during the summer months, this special open house will feature a video about the fort's restoration and provide visitors with an opportunity to talk to fort personnel about that project.

The program is complimentary and the public is invited to hear about this early historic preservation project...as part of National Historic Preservation Month.