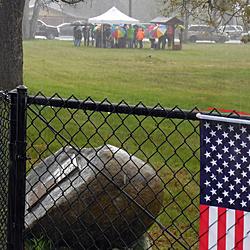 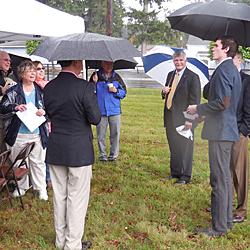 Len Castro, Eagle Scout who built a kiosk honoring those buried at the cemetery, addresses a crowd including former and current mayors of Lakewood (Doug Richardson, l; Don Anderson, r)


The newest of nine markers placed at historical sites around Lakewood by the LHS.

The plaque includes a photo of a Civil War veteran's tombstone, and reads as follows:

1850'S TO PRESENT
Settlement of Lakewood began in the early 1840's, first with Hudson's Bay Company and followed by settlers with claims, around the lakes and the industry powered by water. Pioneers began burying their relatives here in the 1850's. Frank Clark (lawyer) donated and deeded the land to Pierce County in 1881 for the free burial of pioneers and their descendants. Some of the individuals buried there represent early families who arrived in Pierce County by way of the Naches Pass Trail and include the names of McAllister, Bonney, Murray and Benston. The cemetery is still used for this purpose, with descendants of those buried there eligible to use the cemetery. Pierce County owns the cemetery and maintains it as of 2011.

This marker provided by the Lakewood Historical Society and the City of Lakewood.