Meet some Legendary Locals of Lakewood 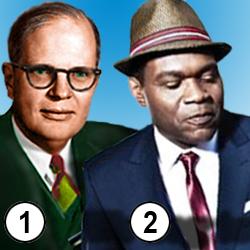 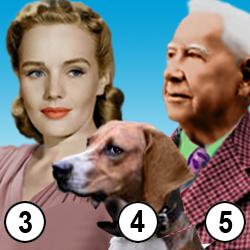 Our thanks to Steve Dunkelberger and Walter Neary for allowing us to use excerpts from their book "Legendary Locals of Lakewood." We urge all fans of local history (and of the people who make it) to buy a copy today--on sale at local book stores and the Lakewood History Museum.

1. NORTON CLAPP, real-estate developer responsible for much of what we think of as old Lakewood, including the Lakewood Colonial Center, the Lakewood Players, and the Little Church on the Prairie.

Clapp came from a pioneer family that helped Frederick Weyerhaeuser buy his first timberlands in Washington in 1890.

He eventually moved on from Lakewood to Tacoma, then to Seattle--where he was one of the first investors in the Space Needle. A former president of both the Weyerhaeuser Corporation and the Boy Scouts of America, Clapp also held many paid and volunteer roles. His civic service led to a Seattle group naming him that city's top citizen in 1970.

2. ROBERT CRAY, multiple Grammy Award winner, got inspiration for his blues career while attending the 1971 graduation party at Lakes High School  He was sitting next to Bobby Murray when Albert Collins performed.

"I was sitting right next to Robert and our jaws just dropped," Murray told the site JB Blues. "I knew right then and there that was what I wanted to do. It changed Robert too. It was great because we were both able to continue a relationship with Albert until he passed away [in 1993]"

The son of an Army quartermaster would go on to form Steakface with Murray, known as the "best Lakewood band you never heard of." Cray graduated to a solo career that has spanned 40 years.

He won his first Grammy Award for the album Strong Persuader. The single "Smokin' Gun" attracted considerable attention. Cray is considered one of the best blues guitarists, period.

3. FRANCES FARMER. Sadly, not every legend's story is a happy one. Western State Hospital's most famous patient, Frances had been an up-and-coming film actress born in Seattle. The story surrounding her mental stability remains mysterious and full of contradictions. Farmer was called the screen's outstanding find of 1936 by film icon Cecil. B. deMille, and Howard Hawks said she was the greatest actress he had ever worked with.

Farmer was a contracted actress during Hollywood's golden age. Her career, however, was cut short by sporadic bouts of odd behavior that landed her in mental health hospitals. Her experiences there spurred books like Shadowland and her quasi-autobiography Will There Really Be A Morning?, and the movie Frances starring Jessica Lange. The Seattle band Nirvana had a song about her, "Frances Farmer Will Have Her Revenge on Seattle."

The accepted version is that Farmer was committed to Western State in 1944 during one of her episodes, which involved attacking her mother. Farmer moved back in with her parents in West Seattle, but she and her mother fought bitterly. She spent three months at Western State and underwent convulsive shock treatment and deemed "completely cured." She was recommitted a year later and remained there for five years.

There is much debate to this day about her treatment at Western State. Jeffrey Kauffman researched the records and medical files following her death in 1970. His exhaustive work, Shedding Light on Shadowland, takes apart the Shadowland book and other accounts. The must-read book sheds new light on what are widely known as "Farmer facts."

The Western State Museum, which is mostly reserved for nursing students and targeted groups involved in mental health issues, has a room dedicated to Farmer and the debates surrounding her.

4. MAN'S BEST FRIEND. Unfortunately, we don't know the name of this splendid foxhound, chosen to represent his colleagues at the Woodbrook Hunt Club. But we're sure he's proud to belong to one of the longest-lived such clubs in America--and one of the oldest continually-operating organizations of any kind in Lakewood.

But advanced age (the club celebrates its centenary this year) doesn't necessarily lead to a sedate, sedentary lifestyle; certainly not in this case. Quite the oppposite, in fact. The air around the Woodbrook kennels regularly crackles with electricity, the kind generated by crowds, excitement and anticipation. Its source? Perhaps one of the last activities you'd expect to find taking place next door to a modern millitary mega-base like Joint Base Lewis McChord: a jolly old fox hunt, by gadfrey!

Men, women and children, all resplendent in bright red riding habits, all on horseback, charge over the club's acreage. Most of it, by the way, is within the last 3% of Pierce County where the original prairies, once stretching from far north of the Lakes District to far south of the Nisqually Delta, are still to be found.

Spurring their mounts to keep up with a pack of purebred foxhounds following in full-throated pursuit a trail of fox-scent laid down earlier, club members present a spectacle reminding one of the England of Tom Jones (or even of Alfred the Great, if you really want to delve into the history of the sport.)

For more information on how the tradition of the hunt is being preserved and practiced right here in our own backyard, be sure to visit the Woodbrook Hunt Club's website.

5. ALEXANDER BAILLIE, founding father of Northwest golf, was born in 1859 in Brechin, Angus, Scotland. He left Brechin at age 21 after graduating from the country's oldest college, the University of  St. Andrews, known as the birthplace of golf.

Baillie emigrated to the United States to seek his fortune. He brought his golf clubs, and the rest is history. He was a founder of the first golf and country club in the region, Tacoma Country and Golf Club, after more than a dozen fellow Scotsmen at Tacoma's Balfour Guthrie Company needed something to remind them of home. At 35, Baillie became TC&GC's first president.

In 1894, Baillie created the first golf course west of the Mississippi, a nine-hole course on 280 acres in what is now South Tacoma. It was only the fourth course in the United States at that time. But the Tacoma location didn't last long. The course was moved in 1905 to its current location on American Lake to be closer to the estates of the well-to-do of the region. Members paid $250 to join the exclusive club. It was a place to make business deals, entertain dignitaries, and enjoy rounds of golf.

Baillie died at his home on Gravelly Lake on September 7, 1949,  just two days short of his 90th birthday and a year after the Tacoma Country and Golf Club held a banquet in his honor that drew 150 guests in October, 1948.