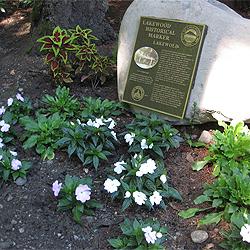 The Northern Pacific Railroad Company got federal land grants around Lakewood to use to bring the railroad to Tacoma in the 1870s. The land around Gravelly Lake was not needed so the Tacoma Land & Improvement Company platted the land and sold to individuals. One five acre lot was purchased by Emma Alexander for a summer home in 1908. In 1918, Mrs. Alexander transferred the property to her son, Tacoma shipping magnate Hubbard F. Alexander (Alexander Steamship Line). He and his wife used the house as a country retreat and purchased an additional five acres next door.

Major Everett Griggs bought the property (ten acres) in 1925 and named it Lakewold (meaning lake woods). He sold the property to Corydon Wagner in 1938. His wife, Eulalie Wagner, created the gardens. The property was designated historic by the City of Lakewood in 2002 and is now open to the public as a non-profit, known as Lakewold Gardens.

This marker provided by the Lakewood Historical Society, the Lakewood Landmarks & Heritage Board and the City of Lakewood.