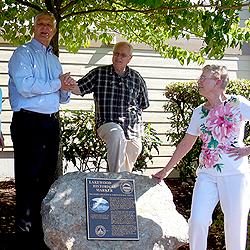 
The plaque reads as follows:

This property was first claimed by Andrew F. Byrd in 1853. The claim was surveyed in September of 1868 by Ezra Meeker and totaled 159 acres. In June of 1923, the Oakes Pavilion opened for boating, bathing, picnics on the grounds and dancing on Sunday afternoons and evenings. In 1924, the Olympic swimming trials were held at the Oakes which included Johnny Weissmuller.

Duke Ellington and Tommy Dorsey were some of the notable bands and celebrities that played in the Oakes Pavilion. In 1936, the Oakes was sold to Lakewood Development Corp. (Norton Clapp). By September 22, 1938, the Oakes was converted into an ice arena for Mrs. Clapp. In 1938 the Lakewood Ice Rink opened to the public. From then on state championships in ice skating, hockey leagues and figure skating were the main activities.

On April 18, 1940 the water stadium was demolished. On October 10, 1948, the Lakewood Figure Skating Club bought the arena. In June of 1955, eight performances of The Ice Capers had 175 participants in the show. The roof collapsed in October of 1982, and the building was soon demolished to build lake front condominiums.

This marker provided by the Lakewood Historical Society and the City of Lakewood.