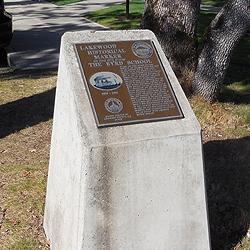 ON THIS SITE STOOD THE BYRD SCHOOL

In 1855, the first school building north of the Columbia River was built at the current site of Park Lodge School on an acre donated by A. C. Knecht. Lumber from the Byrd Lumber Mill at Lake Steilacoom was used to construct the 20 X 30-foot, one room schoolhouse. The school drew children from the Lakewood area and as far as Spanaway and Fern Hill. The Byrd School was moved in 1856 to a more central site on land donated by W. P. Dougherty. The one-acre site was on the southwest corner of his land claim, property later known as the Flett Dairy. The shool was rebuilt in 1861 and remained in use until 1885 when it burned to the ground. Except for a few reunions, the site remained undisturbed until October 20, 1999 when it was rediscovered by members of the Lakewood Historical Society. In 2008, the site was excavated by LHS members. Many recovered relics were put on display in the Lakewood History Museum.