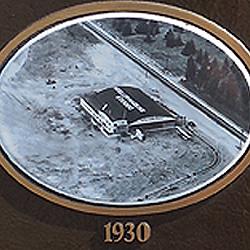 Closeup of hangar (still standing, but converted to repair shop)


The plaque reads as follows:

ON THIS SITE STANDS THE MUELLER-HARKINS AIRPORT HANGAR

In 1922 Rudy A. Mueller and Leo H. Harkins acquired the Tacoma Speedway [see above] and built an airport for Tacoma. The first airmail service arrived here in April of 1926. In 1927 this field was to become the Tacoma Municipal Airport. In 1929 this building, at a cost of $10,000, became the Airport Administration Building. During the 1930's and 1940's pilot training (Washington Air College), national air races and many air shows were held here.

In 1944 the government filed condemnation proceedings against the airport and it became federal property. An Advanced Navy Base was built, but the old hangar was spared. In 1949 the property was declared surplus and acquired by the Clover Park School District and later became Clover Park Technical College. This hangar is one of only a few in the nation to remain intact at its original location.