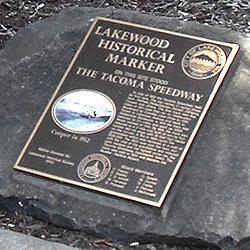 ON THIS SITE STOOD THE TACOMA SPEEDWAY.

In July of 1912 the Tacoma Speedway held its first race. The top names in racing drove here -- Oldfield, Rickenbacker, Tetzlaff, DePalma, Cooper and others. The first track was five miles of dirt road that ran on Steilacoom Boulevard to Gravelly Lake Drive to 111th Street to Lakeview Avenue and back to Steilacoom Boulevard.

A fire in 1920 razed the grandstand which was replaced at a cost of $100,000. The 1922 race was the best, but with the cost of the grandstand and reduced gate receipts and the highest purse yet, the Tacoma Speedway Association failed. The track was sold in 1922 and became the Mueller-Harkins Airport.