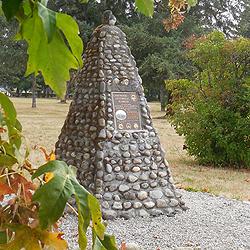 The plaque features an early photograph of Western State Hospital and reads as follows:

Over 3,200 psychiatric patients from Western State Hospital were buried here from 1876 to 1953. Since then, burial has been elsewhere. The graves are marked with numbers for privacy reasons and the stigma of mental illness. These people worked on the award winning hospital farm and in other hospital areas and called the hospital "home." They were mothers, fathers, grandparents, aunts and uncles, children and many were veterans.

May they rest in peace, with dignity and respect.

Dedicated to their memory by The Graves Concerns Association September 2003.

Sponsored by Pierce County Parks and Recreation, The Lakewood Historical Society, and The State of Washington.