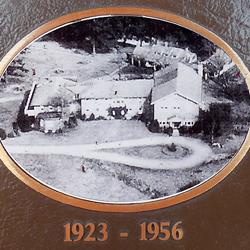 Closeup of photo on marker. 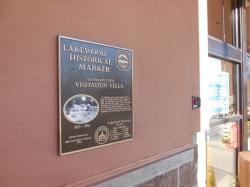 The plaque includes an aerial photo of Visitation Villa with its dates (1923-1956), and reads as follows:

ON THIS SITE STOOD VISITATION VILLA

A Catholic girls school began shortly after the Sisters moved in on August 15, 1923 and operated until 1954. In May of 1956, construction began on the Villa Plaza Shopping Center which opened in 1957. The Visitation Villa building site is in the central southern core of this building and extended into the loading area and street.