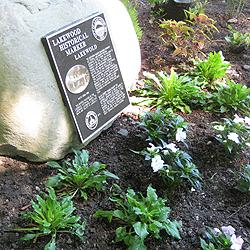 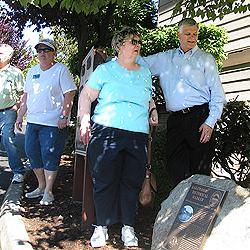 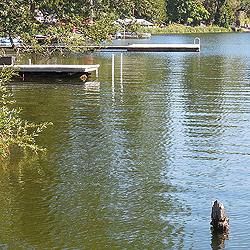 This lonely little piling and a few chunks of foundation visible only when the water level is extremely low--that's all that's left of the old ice arena.

Never mind that July, 2014 temperatures were above the norm. A group of Lakewood historians were standing in the shade when they dedicated two more historical markers in the City.

The marker is not far from the Garden’s gift shop. Be sure to look for it.

The historical organization has been placing these markers around the city to help folks learn about and appreciate the importance of local historical sites such as Visitation Villa (an all-girls school in the 30-50s that formerly occupied the site of Lakewood Towne Center. It’s on the wall of the Safeway store) and the Tacoma Speedway (now the campus of CPTC).

Besides the Garden plaque (Lakewold is celebrating its 25th year as a public garden this year), the group also dedicated a plaque at the Water’s Edge Condos (former site of the Ice Arena).

Several more markers such as the Ainsworth-Boatman House and the Joseph Heath Farm, are scheduled to be placed later this year.

Stop by Lakewood Historical Museum in the Lakewood Colonial Center, at 6211 Mt. Tacoma Drive. S.W. and pick up a map showing marker locations. Museum hours are from noon to 4 p.m., Wednesday through Saturday, 253-682-3480.