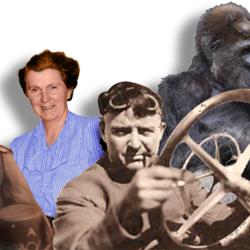 This, our first collection of historical characters, will be followed by many more.


In conjunction with the release of "Legendary Locals of Lakewood," the new book by Steve Dunkelberger and Walter Neary, authors of "Images of America: Lakewood", LHS is doing its part to better acquaint our friends and members with some of the remarkable characters who shaped the history of our fair city.

Throughout the coming months, we'll be introducing a new mover and shaker from Lakewood's past every week or so on our facebook page.

Each newcomer will have his or her own distinct and snappy response to someone offstage who makes the same uninformed observation over and over again: "History? Why, Lakewood didn't have any history until it became a city in 1996!"

So bookmark our facebook page, and whenever you see a new face setting that wise-guy straight, click on it. You'll open a window with a link to the story that goes with that face. And you'll be that much closer to appreciating in its entirety the outstanding (and sometimes outrageous) cast of characters that have starred in Lakewood's grand historical drama these past 200+ years.

COME IN LATE? Here are links to brief biographies of those who have already appeared: our first historical "mystery guest"…and our second…third…fourth…and fifth