Puppets with a history! 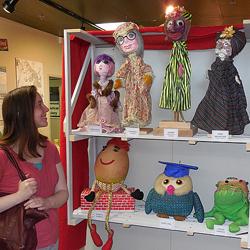 Many thanks to Dick Meier for the beautifully crafted shelves throughout the exhibit. 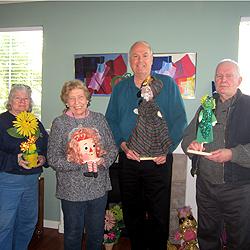 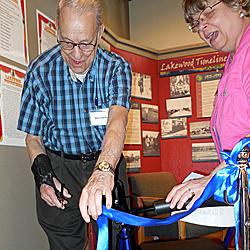 Saturday, May 9: Bill Charlton cuts the ribbon to officially open the exhibit.

Were YOU among the 250,000+ children entertained by Jeanne Charlton's puppets?

Once upon a time, thousands of people flocked to English Town Squares to watch Punch and Judy shows.
Decades later, when TV came into vogue it was the Kukla, Fran and Ollie Show that entertained American children; several years later Sesame Street became a kid’s show hit. Then, the Muppets arrived.
Around Pierce County, the Lakewood Puppeteers, with its cast of around 200 puppets, entertained local schoolchildren. Its cast included characters such as Dippity-do-awful Dan, the dancing dragon.
In a return to the days of those popular local performers, Lakewood Historical Society in May will showcase some of the characters from that 25+-year-long run.
Recently, the stage has been put in place, the curtains hung; the lights positioned…all that remains are for the performers to show up.
In this case, the actors are an assortment of hand puppets created by Jean Charlton.
Charlton’s work earned her the nickname of the Puppet Lady. Sadly this energetic area entertainer passed away last year, leaving her extensive collection to be stored away in an attic.
But Bill, her husband, stepped out from behind the stage wings into the spotlight. His objective: to ensure that the puppets “stay alive.”
“Dippity Do-Awful Dan, the dancing dragon,” is Bill’s favorite, but he’s also partial to the Octopus that he says he’s keeping. Vivian Wessel, another of Jean’s close friends, painted a picture of that character, and “it’s so realistic” that Bill claims it could be mistaken for a photograph.
Charlton’s puppet collection, stored in 41 boxes for several months, recently was transported from its Lakewood home to DuPont. Now it’s been returned to Lakewood.
Beginning May 9 and continuing through the end of the month, Charlton’s Puppets will be displayed at the Lakewood History Museum along with many related puppetry artifacts from the collection that delighted audiences around Washington through 1990.
Jean’s good friend, Dorothy Tveten, helped craft many of her puppets. The women wrote scripts, incorporated music, and along with the stage that Bill made, took the show on the road.
“They presented about 30 shows each year,” Bill recalled. The company’s repertoire included plays such as the dragon drama and the Secret of the Sea Earthens. The Puppeteers had ten standard shows that they presented during the decades.
Being invited to present the Christmas shows at the Governor’s Mansion in Olympia during Gov. Dan Evans’ term was a highlight of a career that also included performances at schools, churches, libraries, museums, Indian reservations. Shows also were performed at Lakewood Playhouse, at shopping centers, amusement parks; even at the Washington State Fair.
The puppets and their creator gained recognition during that time. Lakewood Puppeteers were recognized by Allied Arts, Puppeteers of America, and received an Excellence Award from the Seattle Puppeteers Guild.
“Happy Birthday, America” a show produced in 1976 for the Bicentennial, was placed in the National Archives in Washington, D. C.
Bill hopes that the puppets’ legacy will endure. “It is something that should be carried on. My biggest concern,” he says, “is keeping interest in the puppets alive.”
Visit these intriguing Lakewood puppets during May at Lakewood History Museum in the Colonial Center at 6211 Mt Tacoma Dr SW, Noon to 4 p.m. Wednesdays through Saturdays. Call 253-682-3480 for more information.
Back to All Programs
MUSEUM