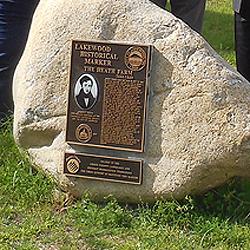 The plaque features a reproduction of a painting of Joseph Heath and reads as follows:

Joseph Thomas Heath was born on Sept. 22, 1804 in Exeter, England. On Sept. 21, 1843 he signed a contract with the Puget Sound Agricultural Co. (Hudson's Bay Co.) and left Cherbourg, France for the Pacific Northwest. Sailing on the British ship "Cowlitz" around the horn of South America to Hawaii. He arrived at the mouth of the Columbia River on June 1, 1844. On June 17, the "Cowlitz" arrived at Fort Nisqually. Heath moved into an existing log house and barn that was built and abandoned by one of the Red River (Canada) settlers about 1840. In the next five years, Heath built a granary, barn, corn shed, Dutch barn, smoke house, kitchen, tool house, dairy, pig sty and an ox shed. He fenced his yard and another 40 acres. Heath kept a very detailed diary, however, only part of it survived. Much of the diary from Jan. 1, 1845 until he became sick on Feb. 9, 1849 still exists. Heath died at the age of 44 just after the end of the diary. He was buried at Fort Nisqually in an unmarked grave. After Heath's death, a U.S. mounted artillery unit, Company M, arrived, leased and later purchased the property from Hudson's Bay Co. In August of 1849, Fort Steilacoom was established using the Heath's Farm log buildings. Heath's house became the Fort Adjutant's (HQ) office. As the Fort grew the log buildings were replaced. Heath's log house was located very close to this historic marker.

Joseph T. Heath marker provided by the Lakewood Historical Society and the City of Lakewood.