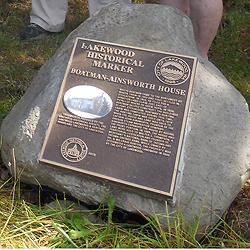 The plaque features a photograph of the house, and reads as follows:

Willis Boatman came to the Northwest by wagon train in 1852 and first settled in Steilacoom. In 1854, he filed for a donation land claim just east of Puyallup where he grew hops. In 1858, Boatman helped construct the buildings at Fort Steilacoom. Boatman's hunting cabin was completed during this time. The hunting cabin was used until 1878 when the house and land was sold to Captain John Ainsworth, founder of the Oregon Steam Navigation Company. Ainsworth expanded the house by adding the front portion. In 1889, the house and land were sold to Walter J. Thompson, a territorial legislator and founder of Merchant's National Bank of Tacoma and Tacoma Savings Bank. While owned by Dr. & Ms. Craig Gunter, the property was designated a Lakewood landmark in 2002 by the City of Lakewood.

This marker provided by the Lakewood Historical Society, the Lakewood Landmarks & Heritage Board and the City of Lakewood.